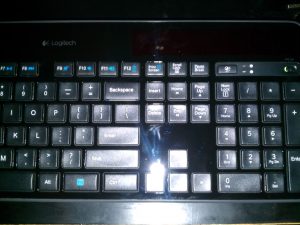 As someone who sits in front of a computer for roughly ten hours a day, the way I physically interface with that computer is very important. Keyboard are a major part of that, and I have always been pretty pick about mine. For at least the last decade, I have used some version of Microsoft’s ergonomic keyboards. Despite being huge, I love the shape and they’re very comfortable to use for long stretches of time, but I’ve grown tired of the mushy feeling and the inconsistency between different keyboard of the same model. I wish Microsoft offered a mechanical version, although I’m apparently a noisy typist, so that might not be the best choice for an office environment.

I do like the snappy feeling of my ThinkPad’s built-in keyboard and also the Bluetooth keyboards I have for my iPad, so I went looking for a full-sized keyboard (gotta have my cursor keys and a keypad). Last week, I grabbed a cheap keyboard from Newegg that fit the bill. For the price it’s a decent piece of hardware, but I can tell this one isn’t designed to go the long haul. It at least let me determine that I can type on a standard keyboard and feel was good, especially for an inexpensive keyboard. I purchased this more as an experimental “proof of concept” than the keyboard I was going to use, so buying it sight unseen wasn’t an issue.

Knowing that I found a form factor I can live with, it was time to get shopping. And since this is something I’m going to be touching hours at a time, I needed to go see one in person before plunking down my hard-earned cash on my final decision.

I do not like shopping at “computer” stores. I actively hate Fry’s and their stupid checkout process where you get stopped at the door for a bag check after waiting in a long line to hand over  your money. I’m glad there’s no Fry’s near me right now. Not to mention shopping there on Black Friday would be beyond my tolerance for closeness to hordes of other people. But that’s another story.

There’s a Micro Center nearby. I’ve been in this store before and found the staff eager to help, but not annoying or stupid (ahem Fry’s ahem). Despite being Black Friday, I decided to give it a whirl. The parking lot was crammed full (I had mistakenly parked at a closed business next door and that was a stroke of happy dumb luck since I was relatively close and found a spot). I was expecting the worst; the store was quite crowded. Despite the crowds, I was helped immediately and none of the employees seemed harried or stressed out. Awesome!

The lady who helped me was actually from home office (I wish I had noted her name). She helped me find the exact keyboard I was looking for, which turned out to be a Logitech K750. A little spendy at $64.99, but if feels great and has a solar recharging. How cool is that? No wires and no batteries to worry about. I’m typing this on it and notice I’m making fewer typos. I like the clicky snappy feel, just like the keyboards I had mentioned before.

“Home Office Lady” took as much time with me as I needed and made sure that I was happy with my choice. I didn’t feel like I was being rushed to make a decision quickly. I was even allowed to open boxes and “test” them right there. Nice. I love my new Logitechs (grabbed one for the house and one for the office) and got them for a great price.

This, folks, is customer service! Thanks Micro Center. I’ll be back.