You know you’ve got a First World Problem when you start worrying about how to make only certain apps on your phone use  your car’s audio system for sound output, while using the phone’s internal speaker with others. The problem enters when what appears to be something simple turns out to be not so simple.

My car acts as a 4,800 pound 355HP Bluetooth headset for my phone. It’s part of Ford’s SYNC system that was developed my Microsoft. Overall, it’s pretty cool and works smoothly. I can press a button on my steering wheel and issue all sorts of voice commands, like calling people, changing to my car’s hard drive for music and so on.

I recently got a Motorola Atrix HD Android phone and it integrates well with my car. The pairing process took all of two minutes. Motorola has a very well-designed windshield mount for the Atrix and I was excited to be able to use the phone’s turn-by-turn directions as my new GPS. Everything worked exactly how I wanted except for one thing: there was no audio on the GPS or anything else for the phone unless it was going through the car’s speakers. But the car won’t do that unless I’m on a call.

Worse, when making a call, the turn directions are audible during the call.Obviously calling someone on a long drive is out of the question. I’d use too many minutes!

I did figure out how to get the GPS voice to play through the car’s speakers, but that required my phone to be the media player for my car. I have a large hard drive with my entire music collection on it for that purpose. I don’t want to use my comparatively puny phone for that, nor do I wish to chew up my data plan by mistake (although streaming music from home to my car via the internet is very cool). And honestly, 390 watts of GPS sound is too much. I don’t need directions with that much sonic clarity. So that option was nixed.

I searched in vain on the Interwebs for a solution to my problem, either a configuration setting on the phone, or an app that would allow GPS to to through the phone speaker but have the car act as the phone’s headset and use its audio system for calls. There is no info out there that I could find.

I drove for about a week in GPS silence. Again, if this is the biggest complaint in my life, I’m doing pretty well.

Then I had a thought: “Apple is clever. Maybe an iPhone can do this.” So I went to the Apple store and asked an employee if iPhones have the ability to play phone calls via Bluetooth while having the turn-by-turn GPS audio go through the phone speaker.

“Of course,” was the answer.

I didn’t want an iPhone. I like my Android. It’s bigger and better for my needs, but I was willing to switch if the iPhone could do what Android won’t. I waited about ten minutes for “someone” who very patiently listened while I went through my scenario. His reply, “Nope. Can’t be done.”

Sigh. Well that settled that. At least I didn’t have to trade my new phone and suffer a restocking fee.

Last Saturday I was in Target doing some shipping with my lovely bride. Some Target stores now have a “Geek Squad” area near the electronics. “Our” Target is one of those. I figured, what the heck, I’ll ask. Sheri was looking at purses, so I had a few minutes to kill.

“Is there an Android expert here?” I asked the portly young man with many arm tattoos who was engrossed with something on his phone.

“That’s me!” was the immediate and friendly reply.

I went through what I wanted to do with him and he thought for about 20 seconds before answering. But answer he did! He said it’s done through a setting in the Bluetooth menu. He showed me the specific settings and said I’d have to be in the car for it to work.

I was astounded. He knew right away. And it was a simple setting on the phone, albeit somewhat hidden four menus in.

So if you have an Android phone (mine’s running Jelly Bean so your mileage may vary for different versions), here’s how to change how Bluetooth Audio works when paired to another device (or car). Also note that doing this will prevent your Android device from working as a media device for your car. The granularity stops at “Phone Headset” and “Media” and from what I can tell is not app specific. It’s system-wide.

First, get in the car and make sure yous phone is paired.

Go into your phone’s Settings, and select Bluetooth: 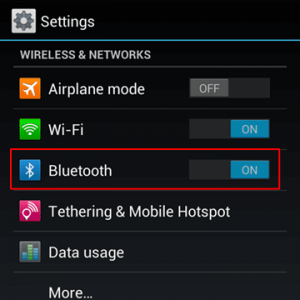 Then select the vehicle it’s paired to that you want to change: 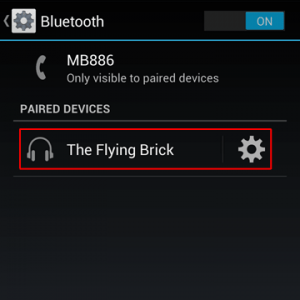 My car is “The Flying Brick”. The gear icon will get you to this screen: 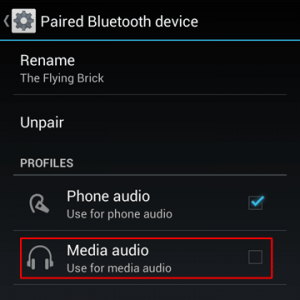 Make sure that “Media audio” (of which the GPS turn-by-turn is a part) is unchecked and you’re good to go. Once I had this knowledge, it took me all of a minute to get what I needed. I verified it’s working as I want and I’m 99% happy.

There is one minor issue that remains, which is making a call will take the screen and audio away from the GPS application. I haven’t really looked at solutions or configuration changes to fix this, and since I don’t really use the phone and GPS at the same time, it’s not much of an issue.

Thanks Mr. Geek Squad at Target! I appreciate your help. And my Android can do something iPhones can’t. Nanny nanny boo boo!

Posted in First World Problems, Technology and tagged Android, Apple iPhone, Bluetooth, Ford SYNC, Geek Squad, Microsoft, Motorola Atrix HD, phone, settings, Target, windshield mount
← Only in grammar can you be more than perfect.There is no pleasure worth forgoing just for an ex… →