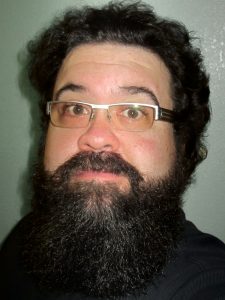 We took a long weekend vacation last week to go visit some family friends of Sheri’s in Montgomery, AL. When we initially made our travel plans in January, we didn’t even realize it was Easter weekend. We were there from Friday to Tuesday. I’ll have some posts about our Alabama adventures over the next few days, but wanted to share one thing that stuck out.

I have been growing my beard for about 5 months now…

It’s funny the comments I get on it. About a month ago we walked into a Walmart here in Colorado and a young man of about 25 walked up and said, “Awesome beard!”. My standard reply is a simple “Thank you very much.”

It’s happened a few other times here in Colorado. Sheri chalk it up to being mountainous here and me looking like a mountain man. Fair enough. She also thinks I really enjoy the attention, which I kind of do.

We had just finished a great BBQ lunch at Dreamland BBQ in downtown Montgomery, AL, home of some really tasty food and a great neon sign:

Sheri and our friend were chatting with the passenger side door of our rental car open and I was standing at the back of the car getting directions from my phone’s GPS. I was concentrating on my phone when I heard someone talking. It took two tries before I looked up. There was an older black gentleman in an 70’s-era Chevy truck (in great shape) stopped, with cars piling up behind him. He wanted my attention.

He said, “Now that’s a beard. I like to see a man who wants to grow a beard grow a beard.”

I replied, “Thank you. I appreciate that.”

“Do you have Jesus?”

The words “Yes, in the trunk” formed on my tongue, but fortunately my “not time to be a smart ass” filter kicked in and I answered with a simple “yes”.

He added, “Well if you have Jesus, then everything will be all right!”

“Indeed it will! Have a great day.”

And with that, he put his truck in gear and drove off. At least 6 cars were waiting behind him and not a single one honked or expressed any kind of impatience. I was a little in awe that my beard had literally stopped traffic in Alabama. Sheri was somehow less surprised.

Posted in Stories, Travel and tagged barbeque, beard, Chevy truck, Dreamland, friends, Montgomery AL, no farting, travel, Walmart
← If people behaved like governments, you’d call the…Be faithful in small things because it is in them … →