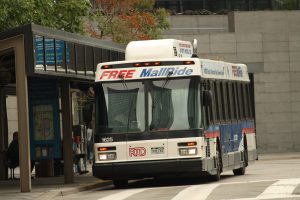 The Mall Ride bus I take from the office to Union Station smelled like soup today. The whole interior reeked of soup! I don’t even know what kind of soup, either. It was just a generally soupy smell. I was standing by a door while riding. The smell dissipated when the door was open, but came right back as soon as the doors closed.

There was no outward sign of a soup spillage in the bus and nobody else had that “I’m smelling soup in a non-soup environment” face. It was very odd. Given that the outside didn’t smell like soup, I don’t think a soup factory had invaded LoDo in Denver.

So I’m not sure why the bus smelled like soup today. It was a bit disturbing and not the least bit appetizing. I’m glad the train didn’t smell weird.

Posted in Denver, WTF and tagged bus, Denver, Mall Ride, Soup, Soupy Sales, Union Station
← Talkers are usually more articulate than doers, si…No one saves us but ourselves. No one can and no o… →