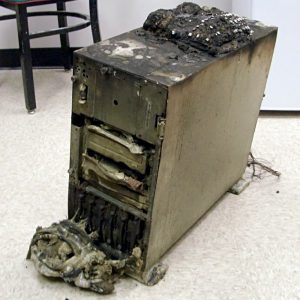 I have been a firm believer in redundant computer hardware for years. I have my important data on RAID 1 (which is two mirrored drives so that if one fails, there is another drive with intact data). It’s a bit expensive, since you pay twice for storage, but after some close calls, I have realized that my data’s value is far more than the price of a single hard drive.

I have also tried to take the data on various machines and get the backups in one place.

After talking with one of the owners of the business where we have a safe deposit box, I realized that I didn’t have a “meteor” contingency: What if a meteor hit the house and everything in it was destroyed? I have one now.

In addition to the redundant hardware, I’m in the process of backing up to two portable hard drives. One will stay in the safe deposit box while the other one will get backed up automatically with the latest important files. Once a month or so, I’ll swap out the drives. I also have “cloud” accounts so that the newer files that haven’t made it to the offsite backup are somewhere outside the house as well.

Is this perfect? No. But it has several facets that make it workable:

So what’s important data? That’s going to be a bit different for everyone. Some of my important files would be considered losable by most and I’m sure I’m not saving some stuff that would be critical to others.

In general terms, here’s what is being saved (in no particular order):

Since I’m “a computer guy” my process is a bit technical and probably more complex than most people would need. But if you don’t have an “in house” backup system, get one now.You can get a multi-terabyte external drive with basic backup software for under $150 these days. If that is a lot of money, think about how much it would cost to reconstruct your data.

I would also urge you to figure out a way to get your data offsite as well, even if it’s an online service. If you want a Box.com invitation (50GB free) just ask, or go sign up!

Posted in First World Problems, Technology and tagged backup, computers, hard drive, the cloud
← As knowledge increases, wonder deepens.War would end if the dead could return. →