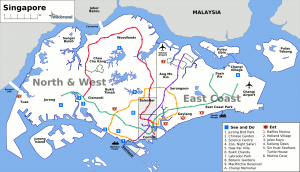 Sheri and I are thinking about taking a trip to Singapore some time next year. Since I don’t chew gum, I didn’t think there would be any issues with personal habits. And then I had a memory that alcohol was forbidden there. It’s not that I have to drink while on vacation, but sampling the local brews and spirits is part of the fun for me. Rather than worry about whether or not prohibition exists, I decided to do some research and find out one way or the other.

This led me to the Singapore page on travelwiki.org.I seached for “alcohol” and quickly found out it’s available, but pricey.

Pornography, pirated goods and publications by the Jehovah’s Witnesses and the Unification Church may not be imported to Singapore, and baggage is scanned at air, land and sea entry points.

I can understand the first two prohibitions and really won’t elaborate on them. But what’s up with the other two? I will admit almost total ignorance of Jehovah’s Witnesses beyond The Watchtower and the friendly-but-annoying folks who go door-to-door trying to sell their brand of religion once in a while. I also know the Unification Church is the home of the Moonies and borders on cult status, but again, I’m mostly ignorant about specifics. I can’t imagine what would tie them into piracy and pornography in an otherwise religiously-tolerant nation.

What intrigues me is what about the Jehovah’s Witnesses and Unification church teachings can be so damaging to Singapore’s society as to have the same import ban as pornography. And they’re not specific about what pornography is, yet are all-inclusive about the religious literature that’s not allowed. Is a Playboy magazine OK? I’m pretty sure Hustler and Penthouse are out and that’s fine. I don’t ready any of those. I also don’t read The Watchtower or The Washington Times, so no worries there, either.

I’m not going to go grab some literature from either of the Singapore-banned religions, and I’m certainly not going to try to bring in anything “naughty” but I am still a little curious.

At least I can have a beer to two and not worry about it.