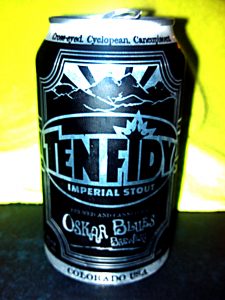 One thing that I didn’t really think about before I moved to Colorado was the amazing selection of beer this state produces. Sure, there’s Coor’s which is my go-to for cheap un-challening beer. But if you want to step it up, there are hundreds of great choices all produced in Colorado. I’m still in discovery mode and that’s a good thing.

One of my favorite Colorado breweries is Oskar Blues. I was introduced to their beer for the first time last year at a local BBQ joint that had cans of “Old Chub” for sale. This is not beginner’s beer. It’s bold, in your face, and amazing. I loved it and was intrigued by Oskar Blues. You can see signs for their signature “Dale’s Pale Ale” in all sorts of establishments in Denver, but there are plenty of other great Oskar Blues brews to try.

Fast forward a few months: Sheri and I decided to tour the brewery up in Longmont, CO. Good choice. Brewery tours have tasting rooms. And I sampled the entire array of Oskar Blues brews they had on tap that day. Some were actually a bit far out for me, but I liked most. Oskar Blues really likes their hops. A lot.

Once exception to tons of hoopy flavor is Ten FIDY, an imperial stout with a “don’t have more than 2 if you plan to be coherent” 10.5% alcohol. It’s an amazingly strong beer both in alcohol content, but also in flavor. It’s also incredibly smooth and well balanced with wonderful and complex malty overtones with a hint of sweetness and chocolate. This is not the beer you chug a can or two of after mowing the lawn (see Coor’s above for that). This is a beer you pour like a fine wine with a great meal. You savor it. You revel in it.

So after touring the brewery in April and tasting a beer that danced on my tongue like little malty angels, I wanted to to get some. This was around April. I went to my favorite liquor store to get some. And … DENIED.

They had some for sale at the brewery so I figured it was readily available and did not grab some while touring. Apparently my beloved Ten FIDY is a seasonal brew and I had discovered it just after the season ended. Since my liquor store of choice is next to a grocery store I visit weekly, I’ve been checking back frequently to get me some Ten FIDY. (Fortunately the completely different but equally wonderful Gubna is readily available and had somewhat filled the void.)

Until today, I was denied Ten FIDY.

It is now officially Ten FIFY season in Colorado. I got me some! Oskar Blues is neither weak, flavorless or inexpensive. They sell the stronger brews in 4 packs. And the four packs of Ten FIDY are $13.99 each. Yep, that’s $84 for a case of beer.

Expensive! Worth. Every. Penny.

I didn’t get an entire case but let’s just say that my beerfridgerator is well stocked at the moment. I’ll be enjoying Ten FIDY season for a while.

One at a time.