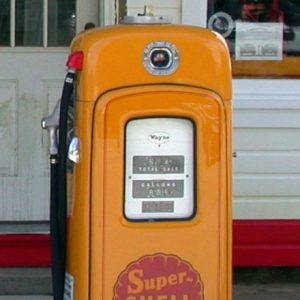 I filled my car with gas yesterday. I usually put the pump on and let it do its thing until it automatically stops and that’s what I did yesterday. When the pump stopped, it stopped at 12.000 gallons. I have probably been pumping gas for 30-odd years and this is the first “whole gallon” stoppage I can remember.

And no, I didn’t take a photo. You’ll just have to trust me on this one.

I wasn’t even tempted to top off. It was the universe saying, very precisely, that I had enough gas in the car. Which got me to thinking: What are the odds? Assuming that the fractional gallons in any given fill-up are random, it’s a simply one in a thousand occurrence that the fill ends at a whole gallon. I fill up approximately once a week or 52 times a year. So dividing 1,000 by 52 gives 19.23. Let’s call it 19, which means that this only happens to me roughly every nineteen years.

So the triple-zero fill-up is rare indeed.

But this also got me to thinking. It isn’t particularly special. It’s quite arbitrary, in fact. The gallon is arbitrary. It’s just useful because we (well America at least) all agree that’s how we measure things. Of course, if I was pumping liters, the same thing would occur on roughly the same frequency. And assuming randomness again, mathematically, the odds of any given 3-digit number appearing are the same. So why not also get excited about x.352 gallons or even x.786? Again, it’s an arbitrary assignment of meaning to x.000 as opposed to other numbers.

I suppose my OCD just likes the neatness of it all.

I’m chalking it up to randomness and enjoyed the fun thoughts it fostered. I refuse to assign deeper meaning to it mainly because I didn’t hit the lottery. Yet.