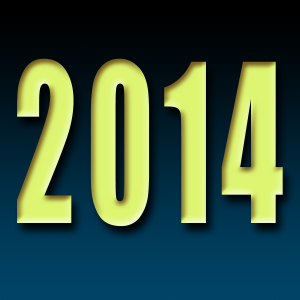 Every year is a mixed bag, of course, but I don’t try to qualify “good” or “bad” any more. It takes too much energy.

There were plenty of experiences that happened last year that could fall into either category, but I prefer to think that they all teach me something. I would prefer that some didn’t happen (like getting hit by a car) but dwelling on the past won’t undo it. On the other hand, treating each experience as a teacher gives it value and doesn’t force arbitrary judgement upon it. I think it’s safe to say that I learned a lot last year. And I had a lot of happy things happen, too.

I also don’t make New Year’s Resolutions. It’s another waste of energy. I either will or won’t and the calendar isn’t going to affect that. The best time to start something is right now. If now happens to be January 1 and I decide to do something, then so be it. But April 6 or October 19 are equally good dates, you know?

Sheri and I do have some goals and plans for 2014. Not expectations, but simply things we’re going to try to get done. And the nice thing about those plans, is whether or not they actually come to fruition, we’ll have stories to tell and things to learn. All we really are is the sum total of everything we have done up until this moment in our lives. And if you’re in a good place, that can’t be a bad thing, even the stuff we’d rather hadn’t happened.

I’m in a good place. I’m thankful for it and vigilant to keep it that way. That’s probably the biggest thing I’ll be doing in 2014.