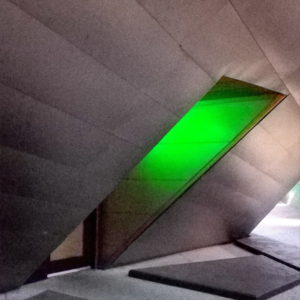 Sheri and I had some passes to the Denver Art Museum that were about to expire, so we went last night. Last night was the last Friday of the month, so there were a lot of various festivities and activities going on. It’s a great museum and one that doesn’t take itself too seriously, which is good. And many of the activities and festivities involved musical instruments and relatively large crowds. It wasn’t quiet or reverent like other art museums I’ve been to. This was no tomb lined with paintings; it was a little noisy and everyone was having fun.

One of the exhibits was various items depicting the Hindu god Ganesha. As Wikipedia says, “Ganesha is widely revered as the remover of obstacles, the patron of arts and sciences and the deva of intellect and wisdom.” There were statues, paintings, tapestries, and so on, from ancient times up to modern. Ganesha everywhere.

There was even a nice 3 minute, 30 second video on how Ganesha is celebrated and honored in India. While watching the video, two ladies entered the Ganesha exhibit area and were all giggles and fun. Once had rather loud clippity-cloppity shoes on and the other said loudly to her friend, “Hey lady! Your shoes are too loud. Please turn them down.” They both laughed and it even got a smirk from the docent guarding Ganesha’s artifacts.

Let’s call the two “Loud Shoes” and “The Talker”.

The video was over and Sheri and I moved to the next exhibit hall of various items with a Western United States theme. Loud Shoes and The Talker were already in there, guffawing at themselves and exhibiting the signs of being rather chemically inconvenienced.

The Talker asked Loud Shoes to turn her shoes down again, and they both snorted, which caused them more laughter as they both loudly pointed out the snorts. They were a little obnoxious, but fun to observe. Granted, the shoes joke was somewhat funny the first time, much less so the second, and would continue to diminish as she kept getting asked.

So far only Sheri and I had seen the full performance in this area from Loud Shoes and The Talker. (The docent had only seen one act in this play.) They moved to the next hall while Sheri and I enjoyed the various Western US things. We found out we both like lithographs, and especially this one of rain in New Mexico. (I didn’t get a picture of it or its title card as Loud Shoes and The Talker were a little distracting in the next hall.)

Sheri and I entered the next hall and the entertaining combo was at the far end, backs to everyone, enjoying a painting with lots of colors.

I’ll note at this point that I wasn’t sure which of the many chemicals, legal or otherwise, that can inconvenience someone to the point of giggles and public buffoonery Loud Shoes and The Talker were enjoying in quantity, but they were in the throes of something significant and amusing to them. I suspect the colorful art only enhanced that effect.

So the two fun ladies are staring at a painting. Sheri is still near the entrance of the hall, but I had quietly walked to where Loud Shoes and The Talker were looking at the painting. I’m a big guy, but I’m stealthy. I’m pretty sure as they were backing and up moving forward, trying to capture the perfect photo of the painting on their phones, that they had no idea I was directly behind them.

And that’s when I heard it. A tiny little fart, a single “pap” followed a three-crackle denouement emanated from one of them. I’m pretty sure it was Loud Shoes. It wasn’t a big ol’ ripper, but something that snuck past the security sphincter. Clearly a mistake was just made, but not a huge one. Ganesha was not offering wisdom to these two, but apparently an obstacle of some sort was removed.

If you know me, you know that I like farts. They’re funny. And an unexpected public fart by a giggly and high person is Comedy Gold waiting to happen. So I moved into their field of view and with a loud whisper said, “Good one, but it was lacking a little bit at the finish.”

Sure enough, more giggles erupted and they started to head toward where Sheri was standing, snorting, laughing and otherwise losing control of themselves. I had to follow up by shouting (as softly as possible) to Sheri, “Look out, dear! One of them is a farter.”

That’s when Loud Shoes nearly tripped having lost control to what looked like convulsive laughter, and I’m pretty sure The Talker was in tears from laughter at this point. Another patron who had missed all of this but heard and heeded the warning about farters walking in her general direction. She moved aside.

It calmed down after that as Loud Shoes and The Talker Left. A few minutes later when Sheri and I left the gallery, I’m pretty sure I saw one of the Ganesha statues near the door wink at me.