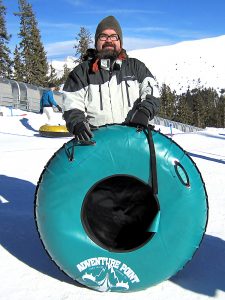 Sheri and I moved to Colorado eight months ago and have done a handful of fun “Colorado” things, but we had not participated in any winter activities until today. We went to the Keystone Ski Resort to do some tubing. I haven’t been tubing on snow in, well, forever.

A good friend had suggested doing something wintery, so that was the seed of this adventure. We all met for a hearty breakfast before hitting the mountains. Keystone is a little over an hour drive from our apartment, and not a bad one at that. It’s always fun to drive the winding roads near the Loveland Pass (11,990 feet) as long as it’s not too icy, and it wasn’t. In fact, it was perfect driving weather: clear and cold. Having a car with two turbos and all wheel drive makes it all quite effortless and a little fun in the bendy sections.

When we got to Keystone it was semi-organized chaos. Skiers, snowboarders, gawkers, and everyone else was milling about the lodge and restaurant areas by the parking lots. After changing into snow pants, etc. and a brief search, we found the ticket pickup office and got what we needed. After a pleasant gondola ride where  I was pretending I was in a James Bond movie with skiing and intrigue as major plot lines, we checked in at the tubing area.

Once checked in and waivers signed, we waited in a yurt, which made me feel wonderfully Mongolian. Seriously, a yurt! How awesome. I want one, because they’re cool and it’s fun to say “yurt”.

After a wait in the yurt and a few unfortunate Swedish jokes (yeah, I know it’s an Asian word, but it sounds Swedish – yurt-dee-yurt yurt yurt yumpin yimminee!), we were shown a quick video explaining the snow tubing process, a few rules, how to pick a tube, how to hold onto other tubers if you wanted to go down in teams and so on. It also explained the “Magic Carpet Ride” that brings you back to the top of the tubing hill.

Good information. After extensive tubing training, I was ready to tube.

I have to say, every single employee was very cheerful and fun to be around. A few of the customers outside the tubing area seemed to have used too much jackass soap when they took their showers today and were acting like they were the only ones there, but the folks inside the tubing area were all polite. Even better, the employees at Adventure Point were fantastic and fun, asking everyone how they’re doing, making sure the customers were all having a good time. It’s nice to see people enjoying their work and having fun spreading that joy.

My first run was great. Being a gentleman of stature has a few advantages. Gravity is among those, and it gave me a good run down the hill. Quite fast, really. OK, very fast, and more than a little bumpy. But it was fun: 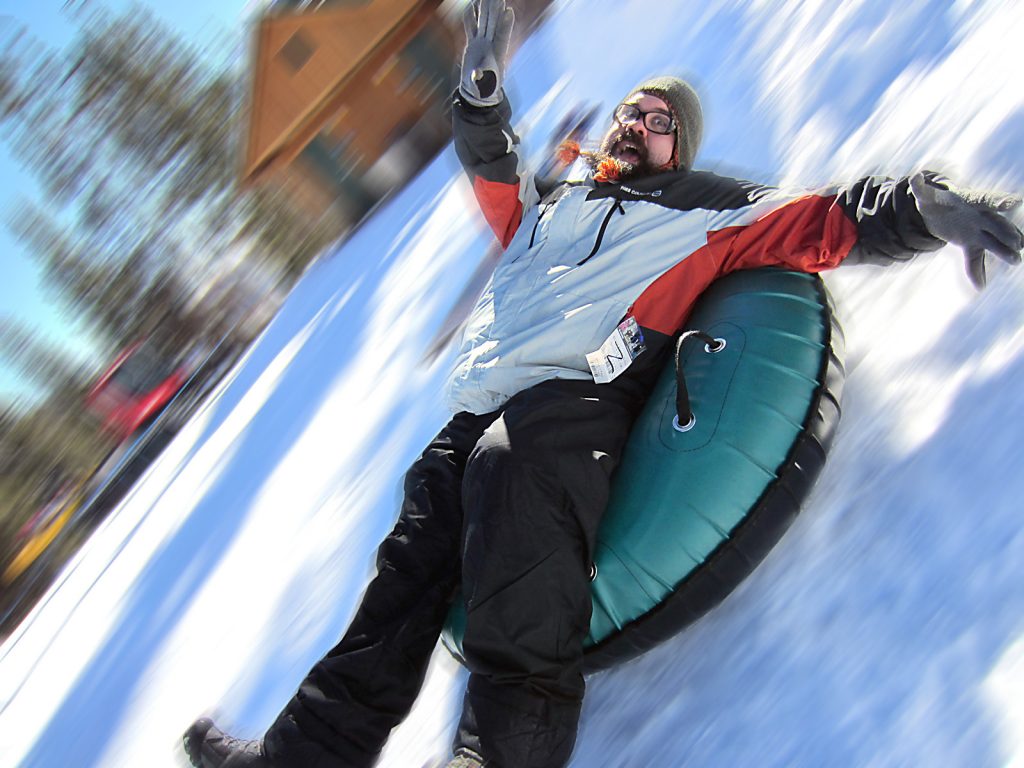 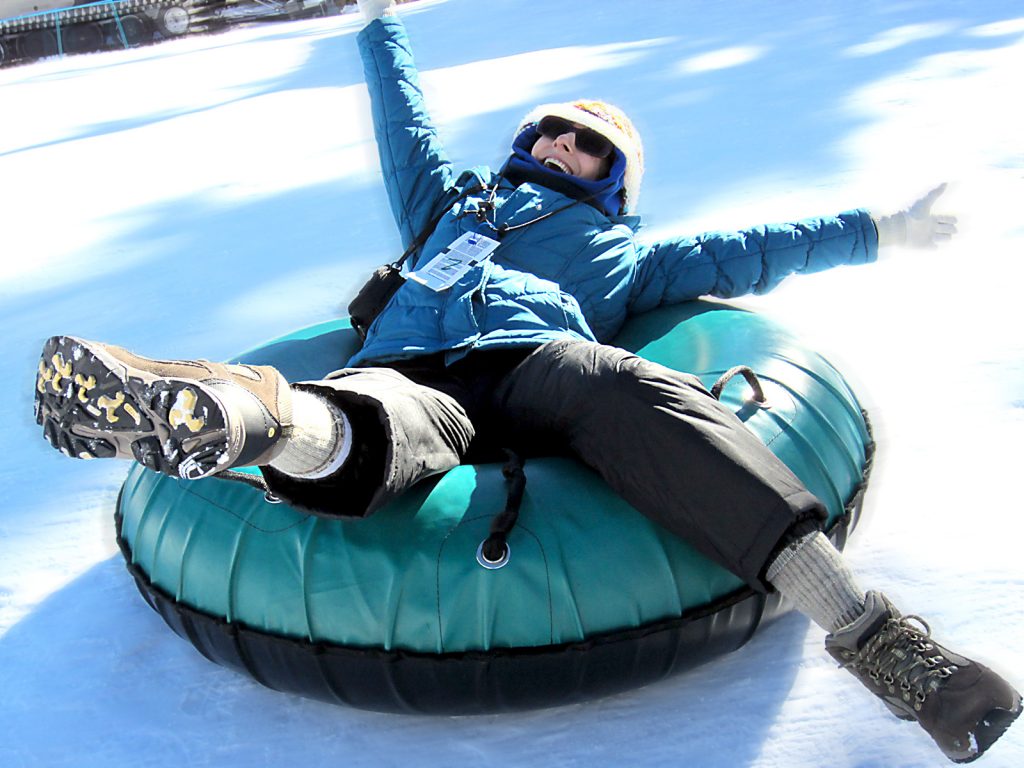 After you make the run down one of these: 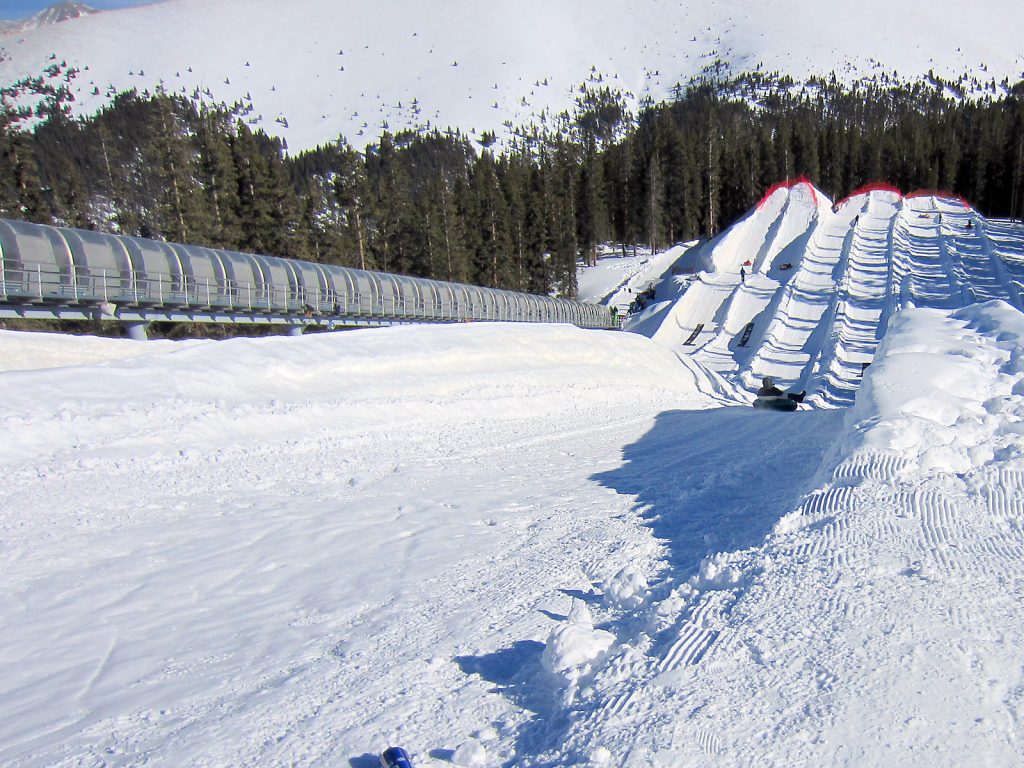 After my second of five runs down the hill, the 20-something man at the top saw me and proclaimed: “Dude, awesome Mountain Man beard!”

“No, I’m jealous. I’ve got this Ambercrombie thing and need to shave it or grow it. You’re doing it right.”

“I’ve been growing it out for about three months now, and won’t be shaving for at least another six months.

Some of the runs (on the left) were faster and scarier than others, but they were all great and I tried all but two. There’s a bit of walking, and at 11,640 feet one sometimes gets winded, especially when one lives at the lower elevation of 5,280 feet. I confirmed the elevation of the hill we were on with one of the employees who had a rainbow-colored Afro hair thing going on. I asked if that was natural, and not getting the joke, he started to say “it’s a wig” when he got it and corrected himself: “of course it’s natural!”

The drive home was not bad. We stopped at Smokin’ Yards BBQ in Idaho Springs, CO. The altitude had gotten to me a little bit and I wasn’t particularly hungry, but knew that having had nothing but a granola bar since breakfast, I needed some food. And Smokin’ Yards was great. It was well cooked and real smoked barbeque, with sauces that were distinct without being overbearing. If you’re traveling through Idaho Springs, I recommend it.

Being a Sunday, traffic on I-70 was building a bit as people who were playing in the mountains but don’t have a holiday tomorrow were heading back to Denver. Just like us. It wasn’t terrible, but it was slow for an interstate. We were fortunate that our friend suggested taking US Highway 6 back through Golden instead, which was perfect. It might be a little bit longer drive in miles, but it’s more scenic and winding than the Interstate. It also had less traffic with no backups, so it most likely took less time. Win-win!

We made it home safely but exhausted. It’s amazing how one hour of tubing turned into leaving at 9:00am and getting home at 6:00pm. Sure, we had two meals on the road and took our time, but it took a while and was totally worth it. Being exhausted from this kind of fun is the best kind of exhaustion.

I love living in Colorado.